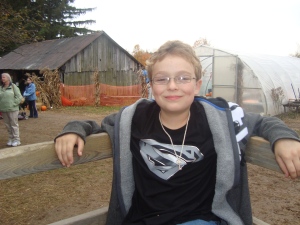 Josiah was the first little boy to join our family. We already had 2 daughters. He was also the first grandson on one side of the family and the first newborn grandson on the other side (he has an older male step-cousin). Babies are always welcomed with joy, on both sides of the family, but this was a little “Prince-y”. We were thrilled to be parents of a son. Yes, we disappointed a certain family member by not naming him “Henry” but he bears his father’s name as his middle name and I believe we have been forgiven.

Josiah was a baby who seemed to relish routine. I hadn’t used any routine whatsoever with his oldest sister and I struggled to shower and to sleep. The next sister entered into a routine established by her older sibling and she was a pretty easy baby. We decided that with 2 girls in school, we needed a routine. Josiah seemed to agree. At 3 weeks old we had to spend the night at a relative’s home for a family event. Josiah didn’t sleep. He and I spent a pretty long night awake. That was fairly normal with newborns so I didn’t think anything of it. Until we decided to put him down at my sister-in-laws one evening so that we could watch a movie. He went down without incident every night at home so we figured it would work there. We were mistaken. We ended up going home without seeing the movie.

Josiah’s development was also delayed. A little at first. My mom told me something was wrong. I told her that he was the first boy and we needed to be patient. A couple of medical incidents at 18 and 23 months really brought the problem to a head. That was when it started. The quest to find out what was wrong with Josiah.

His speech was our first concern. He had had a few words before a seizure at 18 months old but he had lost them. Now he had a very small vocabulary and he was approaching 2 years old. When we had his language assessed, we were quickly thrown into the system. He started at a part-time daycare for social development and to learn some play skills. He was accessed by occupational therapists, physiotherapists, psychologists, development specialists and doctors. I am not even sure how we handled it. Our life became a series of appointments, therapies and struggles. Struggles to get him to sleep. Struggles to get him to eat. To talk. To play. To interact.

Then, after 3 1/2 years of struggle, we finally had an answer. A diagnosis. Autism. Higher-functioning autism but still autism.

I was accused by our social worker, shortly after his diagnosis, of going everywhere I could to get a diagnosis. I had “fished” for it until I had the answer I wanted. I am not sure that I have ever met a parent who wanted a diagnosis of autism for his or her child. Maybe some might. But not me. I just wanted answers.

Sometimes this social worker’s words come back to torture me. “Maybe I was just looking until I got what I wanted”. Karissa has been the one to remind me, with her extensive experience with autism, that he has autism. Not as badly as some kids she’s seen, but it is there all the same.

Life didn’t immediately become a bed of roses when we knew what we were dealing with. We just had a name. He still needed extra help. He was still different. Sometimes I think that disabilities like autism are the hardest to deal with because they are invisible. There is no outward sign of a problem. He doesn’t look different than anyone else. But he is.

Autism is defined as “a complex developmental disorder distinguished by difficulties with social interaction, verbal and nonverbal communication, and behavioral problems, including repetitive behaviors and narrow focus of interest.” It is a big definition but I think it adequately describes the condition. Autism can affect so many areas of, not only the diagnosed individual’s, but his or her family’s life. Josiah’s life looks different than a lot of other boys. Our family life looks different than other families. I am different than a lot of other moms. That is just the way that it is. God had a different path for us.

Josiah was 11 years old when we found out that Arlynne died. He was awake when the police officer came to our house. He heard right away. The night was a blur. I don’t remember if he cried. I don’t remember telling him myself that Arlynne was in heaven. But he knew. On some level, he knew. He was in her room, with his cousins, long into the night.

We decided not to interrupt his routine. He was scheduled to attend the summer camp where Karissa was working the following week. Karissa would not be going to work but Josiah was going to camp. At a time where everything was uncertain, he needed this one stability. I never heard what he talked about that week. I trusted the staff to be able to help him.

Josiah wasn’t involved in the arrangements like Karissa and Eden were. He didn’t have that stomachache that Eden complained of. He remarked recently though that the summer Arlynne died, his stomach was smaller. His appetite was gone, just like the rest of us.

He went to the funeral home and saw his sister with our family. He stood beside her “treasure chest” and could take his last look at her this side of heaven. Of course, he quickly forgot on the way home and started arguing about dinosaurs with his 3 year old brother. He is an “out of sight, out of mind” kinda guy. I think it made it easier on him.

He wasn’t at the visitation. Only Karissa was. We had anticipated a large crowd and thought it would be better for him to be somewhere else. We had had a wonderful former worker for him who took him that day. We also had an educational assistant from his school who came and “hung-out” with him at the funeral. He didn’t make it into the sanctuary. It was okay. He would grieve in his own way.

Of all the kids, Josiah is the one who likes to go to the cemetery. He never makes the fuss the other kids do. I don’t know if he likes it or he just likes to be doing “something” but I’ll take it either way.

He is living in her room. It was easier for him to move into it than for me to let him. I think she would have wanted it that way. It was hard but I can almost hear her voice assuring me that she doesn’t need it anymore. Her space right now is far better than anything we have here.

We painted it with the blue paint that he chose. We left stripes of the purple that she painted on the walls (and doorframe and carpet and ceiling) herself to remind him of her. He has a picture of her on his headboard bookshelf with her favourite verse. Philippians 4:13, “I can do all things through Christ who strengthens me”. He copied that verse onto his whiteboard also. Words to live by.

Josiah decided to get baptized after Arlynne died. He had been there when she had made this step of faith and now he would too. I had one of the pastors at our church speak to him. He was certain that Josiah knew what it meant and assured us that we should let him. His faith might not look like mine, it might not look like anyone else’s but that is okay. It just has to be right for him.

Life with Josiah has never been the way I imagined it would be. Life with kids rarely is. I am not an expert on autism. Most of the time I am just treading water. I can empathize with other parents of autistic kids though. I’ve walked a mile in their shoes. Our autistic kids may all look different but we parents have a common bond. We belong to the same club.

As Josiah has gotten older, we have had other roads to travel. New roads. Scary roads. But as I learned today in my newest Bible study,
“3 He will not let your foot slip—
he who watches over you will not slumber;
4 indeed, he who watches over Israel
will neither slumber nor sleep.” Psalm 121:3-4
I am thankful that my Father God is with me all along the way. The terrain may be different but I am in good hands. And so is Josiah.

I would love to read your comments... Cancel reply

Grace From the Ashes

Grace From the Ashes